I am often asked by entrepreneurs and start-up companies if it is worth their time and money to enforce non-compete agreements. As with most business 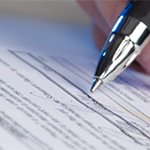 decisions, it is important to understand the pros and cons of non-compete agreements before answering the question. In this latest Innovator’s Counsel update, I outline the current Massachusetts law and how non-compete agreements are typically enforced in the courts. This article is provided for your general information only. As with all legal decisions, you should consult an attorney about your specific situation.

What is a Non-Compete Agreement?

A non-compete agreement is a contract signed by an employee agreeing not to compete with the employer for a specified period of time, usually in a certain geographic location, after they leave the company. Non-competes are intended to prevent an employee from taking trade secrets and clients to a competitor after leaving a company. They generally include promises not to work for a competitor, not to solicit customers from their former employer and not to use confidential or proprietary information.

What if a Former Employee Violates a Non-Compete Agreement?

The primary legal means by which to enforce a contractual non-compete is through a request of the Court to grant a preliminary injunction, essentially enjoining (stopping) the target ex- employee from competing with the ex-employer pursuant to the terms of the non-competition agreement or covenant.

What do Judges Consider When Reviewing a Preliminary Injunction Request?

Judges first consider if the former employer has demonstrated that the agreement:

(a) is necessary to protect “a legitimate business interest” of the employer,

(b) is supported by consideration,

(c) is “reasonably limited” in all circumstances, including “time and space,” and

What is a Legitimate Business Interest?

Legitimate business interests that an employer may seek to protect include trade secrets, confidential information, and good will. A non-compete is not enforceable if it is merely trying to protect the employer from ordinary competition.

An employer is permitted to protect customers’ names, addresses and other contact information through non-compete agreements.

Courts have also recognized that goodwill with its customers is a legitimate business interest that employers may protect through non-compete agreements.

However, non-competition agreements that provide for a blanket prohibition of an ex-employee from working for any other company that generally engages in the type of business as the ex-employer have been held to be unduly restrictive.

What is Reasonably Limited in Time and Space?

If a restrictive covenant is too broad in the time it restricts competition, in geographic area of restriction, or in any other respect, it will be enforced only to the extent that it is reasonable. The determination of the reasonableness of an agreement always turns on the specific facts applicable to the particular case. Covenants not to compete are divisible, and may be modified by a Court and enforced in their entirety, or in part.

Examples of terms that have been found “reasonable” by the courts include: