Can one party to a contract compel a non-signatory party to arbitrate a contract dispute under Massachusetts’ law?

Let us use the following hypothetical as an example:

A single member LLC (“Dental Worx”) is created for a general dentistry practice owned and operated by Dr. Shine. When Dr. Shine was first opening Dental Worx, he took on an Investor who agreed to provide substantial funding to Dr. Shine’s practice under a written IOU.  As it reads, the IOU provides for mandatory arbitration in the event any dispute related to the IOU arises.  The identified parties to the IOU are the Investor and Dental Worx. Even though the party executing the IOU for Dental Worx is Dr. Shine, he is technically not signing the IOU in his individual capacity.

When the Investor learns of Dr. Shine’s diversion of the investment monies being provided for Dental Worx – which would be a clear breach of the terms of the IOU – she attempts to collect immediately what she invested in Dental Worx under the IOU. Dr. Shine adamantly refuses to engage Dental Worx in arbitration voluntarily, claiming he has done nothing wrong, and still has more time to repay the monies owed under the terms of the IOU.

In applying Massachusetts law, however, the large majority of the decisions of our courts have only comprehensively addressed the separate but related question whether a non-signatory can take advantage of an arbitration agreement. See, e.g., Constantino v. Frechette, 73 Mass. App. Ct. 352 (2008). However, until the relatively recent Massachusetts Appeals Court case of Walker v. Collyer, 85 Mass. App. Ct. 311 (2014), Massachusetts jurisprudence had not resolved the particular question at issue here; that is, whether and in what circumstances a signatory can compel a non-signatory to arbitrate by virtue of an agreement he or she has not signed.

Who Determines Arbitrability in the First Place?

As noted in a previous IC blog post, just because two parties to an agreement agree, at the outset, to arbitrate any disputes arising 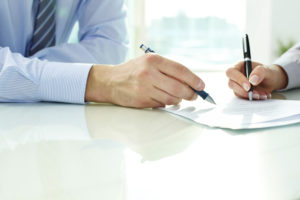 thereunder does not mean that when such a dispute arises, the two parties cordially and amicably proceed to arbitration. Indeed, I get calls all of the time from individuals and businesses alike that are surprised to learn that the only way to enforce that arbitration provision is to file a lawsuit with the Court and ask that it compel the recalcitrant party to arbitration. Once that lawsuit to compel arbitration is filed, the question whether any party is bound by the arbitration agreement is a “gateway dispute” that is, an issue for the court, and not the arbitrator, to decide in the first instance. See Massachusetts Hy. Dept. v. Perini Corp., 444 Mass. 366, 375-376 (2005). In non legalalese, this means that if a party was attempting to bind a non-signatory to an arbitration agreement, and the non-signatory “attacks the very existence of an agreement, as opposed to its continued validity or enforcement,” a court must first resolve the question of arbitrability before it can compel any party to arbitration. Id.

The Roping-In Of the Non-Signatory

One of the first ways a non-signatory would attack an attempt by a signatory to bind it to an arbitration provision is to look to the plain language of the agreement itself. In most cases, the Agreement at issue specifically identifies the parties thereto. Thus, the argument goes that only those specifically identified parties in such an Agreement are bound by its terms. The general rule is that “[a]bsent advance consent to [a contractual] agreement, a party cannot be compelled to arbitrate a dispute.” Constantino v. Frechette, 73 Mass. App. Ct. 352, 354 (2008).

However, what happens when (for example) a single member LLC becomes a party to an agreement that requires arbitration of any disputes, yet it is the individual behind the LLC itself that is really deriving all of the benefit of the agreement? Most are surprised to learn that under these circumstances, the obligation to arbitrate is not limited to those who have signed an arbitration agreement. Walker v. Collyer, 85 Mass. App. Ct. 311, 315-322 (2014).

In our example, there are many reasons why it would make sense for the Investor to attempt to rope Dr. Shine into the fray equally with Dental Worx, not the least of which is that it exposes Dr. Shine’s personal assets to collection under any potential judgment. But how does the Investor in this situation compel Dr. Shine to arbitration in his individual capacity when the IOU is clearly between she and Dental Worx, a limited liability company – the very purpose of which is to shield its individual members from personal liability?

Exceptions to the general rule binding parties only to arbitration agreements they have signed arise out of common-law principles of agency and contract law. The Federal courts have recognized six bases for enforcing an arbitration agreement with respect to a non-signatory: (1) estoppel, (2) assumption, (3) agency, (4) veil-piercing/alter ego, (5) incorporation by reference, and (6) third-party beneficiary. Id.

A separate blog post devoted to each of the aforementioned six bases for enforcing an arbitration agreement with respect to a non-signatory could (and may in the future!) be written as there is much case law interpreting each in a wide variety of fact patterns. For our purposes here, however, I will focus only on the old common-law theory known as estoppel. “[B]y knowingly exploiting [an] agreement, [a party is] estopped from avoiding arbitration despite having never signed the agreement.” Id., citing Thomson-CSF, S.A. v. American Arbitration Ass’n, 64 F.3d 773 (2d Cir. N.Y. 1995). The primary form of estoppel (sometimes called “direct benefits estoppel”) allows a signatory to compel to arbitration a non-signatory party receiving a direct benefit from an arbitration agreement. Id. at 778-779.

For direct benefits estoppel, an entity “knowingly exploiting an agreement with an arbitration clause can be estopped from avoiding arbitration despite having never signed the agreement.” Walker v. Collyer, 85 Mass. Appt. Ct. at 320. The only catch is that the benefits must be direct; that is, such benefits must be “flowing directly from the agreement.” Id. The benefits are indirect — thus not estopping the party — “where the nonsignatory exploits the contractual relation of parties to an agreement, but does not exploit (and thereby assume) the agreement itself.” Id. Exploitation of the agreement itself is often evidenced by the non-signatory expressly availing his or herself of any benefit flowing from the arbitration agreement. As one court put it, there must be a “close relationship between the entities involved, as well as the relationship of the alleged wrongs to the nonsignatory’s obligations and duties in the contract . . . and [the fact that] the claims were ‘intimately founded in and intertwined with the underlying contract obligations.’” Id., citing Thomson-CSF, S.A. v. American Arbitration Ass’n, 64 F.3d at 733.

Applying the theory of estoppel to our illustration above, the Investor must argue that she may compel Dr. Shine to arbitration, individually, because he knowingly exploited the contractual relation of she and Dental Worx (the parties to the IOU), thereby deriving a direct benefit from the arrangement in the form of his personal use of the Investor’s investment monies, to the detriment of the Investor.

Practical Considerations in Compelling a Non-Signatory to Arbitration

That being said, even with the Walker v. Collyer opinion as the backdrop, I can tell you that in practice, when this issue is presented to a Court, it is very difficult to compel a Dr. Shine to arbitration on an individual basis. Where Dental Worx itself is the signing party to the IOU, it is an uphill battle to compel Dr. Shine to arbitration because he simply never signed the Agreement in his individual capacity. To successfully argue that Dr. Shine, as the individual behind the LLC actually deriving the direct benefit from the IOU, should be compelled to arbitration under this set of facts, the Investor will require a substantial heap of evidence that shows an inextricably close relationship between the alleged diversion of investment monies and Dr. Shine’s actions. While such a showing may, in-fact, be possible, it is a heavy burden to meet.

Whether you are the Investor or Dental Worx in our example above, the best approach is to always have the contract and any proposed mandatory arbitration provisions reviewed by an experienced business litigation attorney prior to signing the documents. Having a more complete picture of what rights and responsibilities arise under such contracts and provisions when/if push comes to shove between the parties thereto could save all a substantial sum of money in being forced to litigate the issues after the fact. Asking an experience business litigation attorney for assistance in protecting your interests before you’re bound by the terms of a contract can also help each party to more fully understanding one’s options, which provides for a more accurate cost-benefit analysis to be undertaken before selecting the best strategy for your goals at each decision point along the way.